Best Resistance Bands Exercises (at Home or at the Gym) 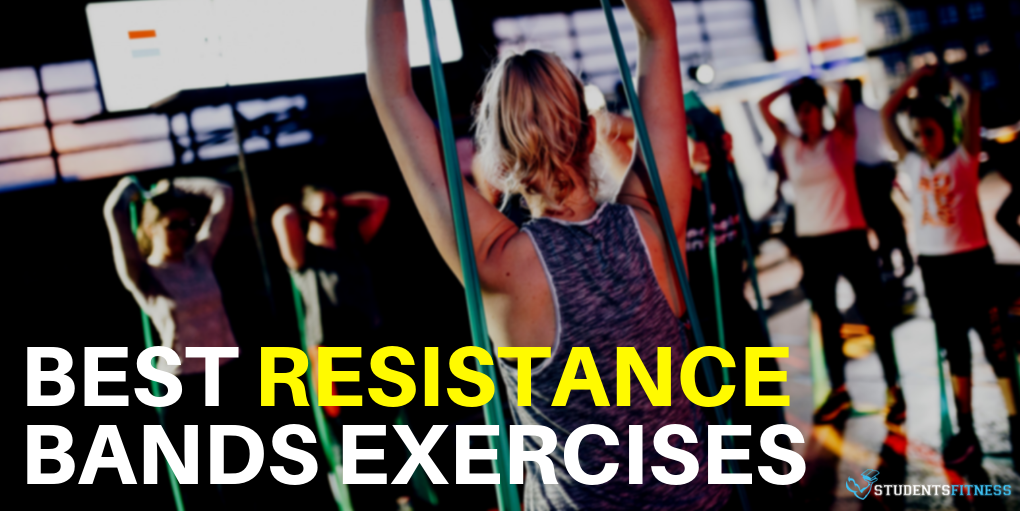 If you’re a busy person or you like to travel a lot, it can be difficult to find the time or space to work out.

You can keep them in your car or your backpack for an effective workout, anywhere!

Even in between classes at school!

Plus, your gym likely has some bands you can try if you don’t want to buy some without knowing how they work.

So, how do they work?

I’ll cover that. Then I’ll cover some exercises you can do with the bands to workout every part of your body.

What are Resistance Bands?

Stand up and put your arms out.

Can you feel a wall on either side of you? No?

Then you have enough space for a resistance band workout.

A resistance band is a length of stretchable material, most often rubber. You fight against that stretch for the resistance.

Some people call them exercise bands.

They come in two styles: tubes and flat bands.

I’m just gonna refer to both of those as bands for now.

Why are Resistance Bands a Good Workout Tool?

There are three main reasons why I like resistance bands so much. These are convenience, price, and versatility. 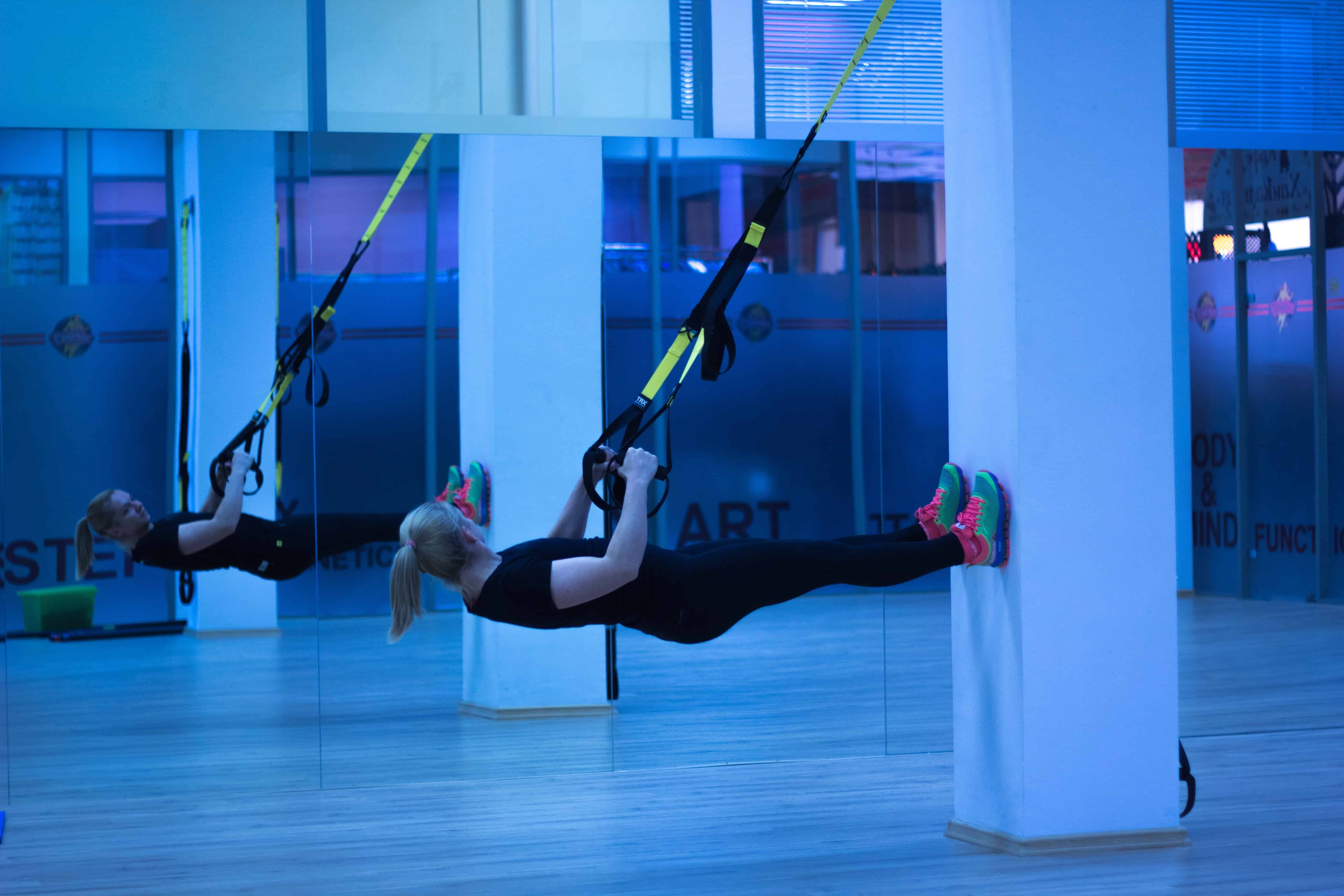 I mean it when I say “anywhere”

I touched upon my favorite reason why resistance bands are a good workout tool earlier, and that’s convenience.

They are small and light, which lets you take them anywhere.

Do you often skip workouts because you can’t be bothered to make it to the gym? Well, you can’t use that excuse if you own some bands!

They’ll even fit in your backpack and take up less space than yet another notebook.

Well, you get it.

You get your money’s worth with one set of resistance bands, especially when you consider how versatile they are.

You can exercise every part of your body with resistance bands.

Sure, you can work out most of your body with dumbbells too, but you can actually do more with resistance bands.

You can’t do dumbbell leg presses. But you can do resistance band leg presses! 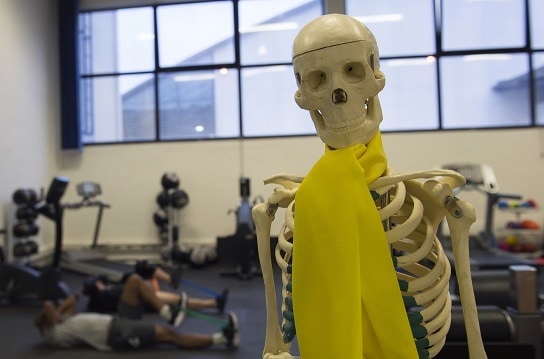 You can even wear one as a scarf! Photo by Senior Airman Nesha Humes

Or chin presses. Literal chin presses, where you hold the band up to your chin and press down with it.

Yes, you can exercise your jaw, too!

Let’s see a dumbbell do that!

You can hold the resistance band in place and workout against yourself.

Or you can stand on part of the band and emulate a weighted exercise.

Or you can anchor the band to something like a door frame and do exercises that would normally be limited to expensive machines such as StairMasters.

Are Resistance Bands Good for Building Muscle or Just Toning?

Most resistance band packages seem to be aimed at toning and don’t give the impression that you can use them for serious muscle gain.

Well, the truth is that your muscles have no clue what’s resisting them. They just know that they need to overcome that resistance in order to grow stronger.

(Though, resistance training is only one part of growing big muscles!)

Some people think that heavy metal weights are necessary.

If you get the same amount of resistance from a piece of rubber, what’s the difference?

Do note that the amount of resistance changes as you stretch the band out, so exercising with resistance bands is a little different than using a dumbbell.

How Heavy of a Resistance Band Should You Use? 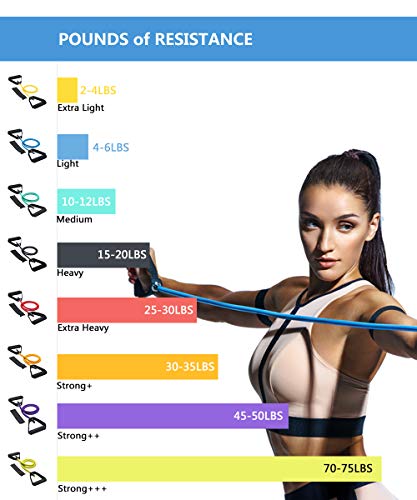 Resistance bands don’t convert 1-to-1 with other weightlifting tools when it comes to measuring progress.

They tend to use more stabilizer muscles, so a movement that’s normally easy may be surprisingly difficult.

Also, there’s more of a chance (because of the rubber) for the band to snap back, which can be dangerous!

So, start with a lighter band than you expect you need to. You’ll need to experiment with differently weighted bands to find what works for you.

Thankfully, bands often come in a set of differing strengths.

Since resistance bands are so versatile, compiling a complete list of exercises you can do with them would be a neverending task.

So, here is a smattering of the best resistance band workouts, each with a short explanation. But first, two words. 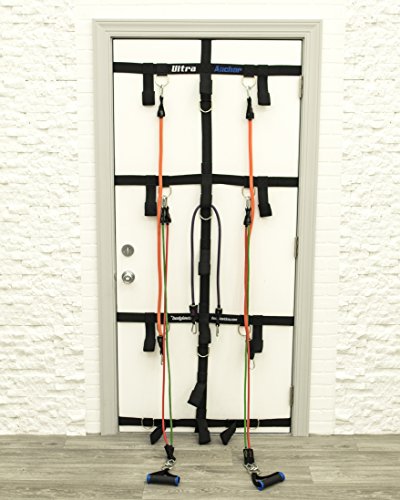 Some of these exercises require that you anchor the band to something. A post or door is the most common anchor point.

Some resistance band sets come with anchoring hooks which attach to the anchor. Others don’t, and you’ll have to loop the band through itself or buy an anchor.

Attach the bands to something low, such as the bottom of a door.

Face away from the anchor and hold the bands in both hands, next to your body. These should be some tension when standing with your feet flat.

Stand up on your toes then gently lower yourself back down.

Abductor muscles are responsible for moving your limbs away from your body.

Anchor the band low on a post. Stand parallel to the anchor and slip the band over the ankle on your opposite foot.

Stand so there is light tension when you have your foot crossed over the other one, close to the post. Move it away from the anchor point then back.

This exercise is very similar to the abductor exercise (if the name didn’t give it away), but works out the muscles that bring your leg toward your body instead.

So, do the exact same thing as above, except attach the band to the inside leg. Then, bring that leg across the other one. 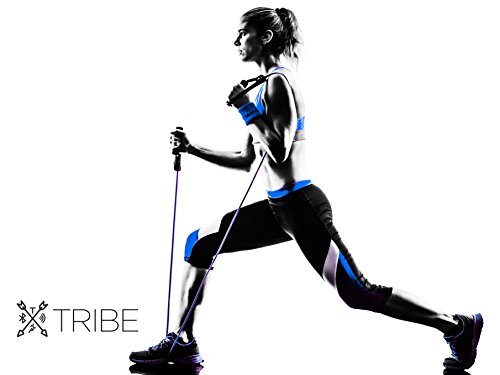 Stand in a bodyweight squat position, except with one end of the band in each hand. Stand on the band with your feet.

Perform a normal squat. The band will provide additional resistance as you near the top.

You can do the same thing with lunges, too.

Stand up straight and hold onto the band with both hands.

Turn your head to one side and push out your hand to that side. Bring your other hand close to that one.

The band’s location in the first hand should be so that the moment you start pulling with the second, you start to feel resistance.

Pull along your arm and chest with that second hand until you reach that arm’s shoulder, then return to the starting position. 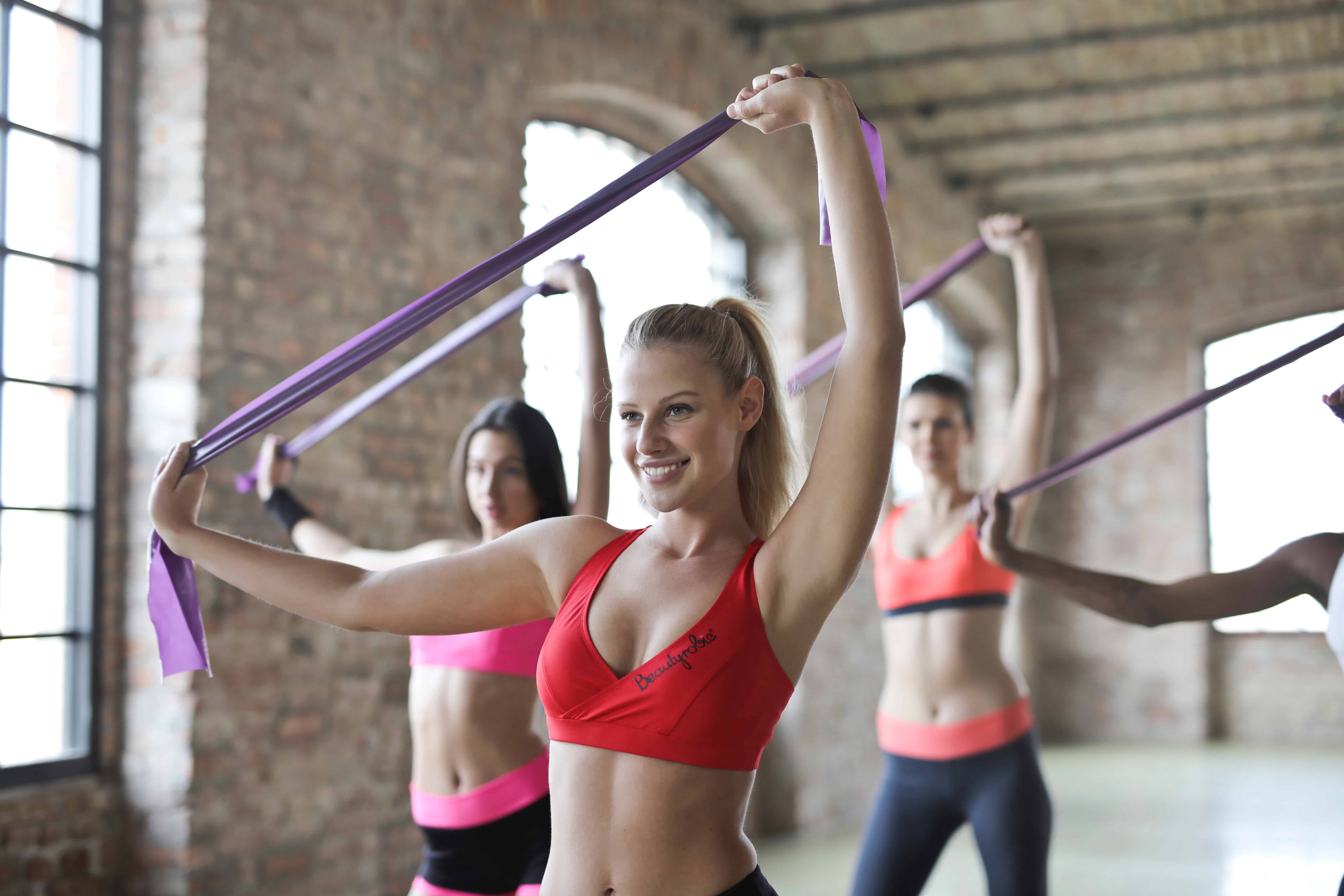 Don’t forget to work out both sides!

Stand up straight and stand on one end of the resistance band. Hold the other end in your hand.

Keep your elbow by your side as you pull up with your hand, keeping the wrist straight, just like you would do with a dumbbell bicep curl.

If you’re not able to do a pull-up yet, you can do a similar movement called a pull-down.

Anchor the band to something above your head.

Grab the band with both hands, keep your shoulders down, and pull down.

Make sure not to let go as you let your hands go back up! 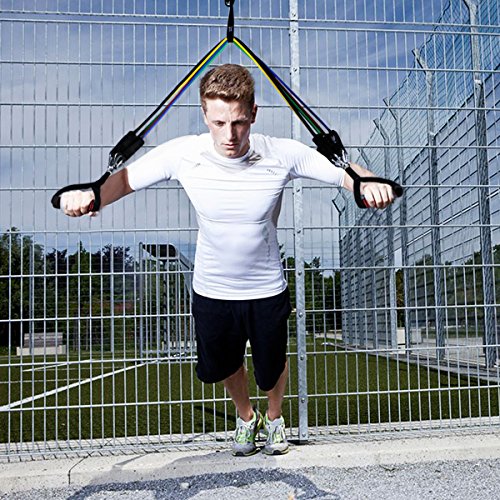 Stand up straight with one foot on the middle of the band.

Hold the ends of the band in either hand.

Start with your elbows down and hands next to your shoulders. Push directly up and stop before your elbows get locked out, then return to the starting position.

Exercises for the Chest

Secure the bands behind you. It’s good to attach them to a post or a wall, but I’ve done these with a short band going behind my back.

Start by holding the bands in your hands with your arms outstretched. Keep them straight as you bring them in front of you until they are parallel, then return to the starting position.

Secure the bands behind you similar to the chest flies.

Start with the bands in your hands and your hands next to your chest. Push forward until they are straight in front of you then return to the starting position. 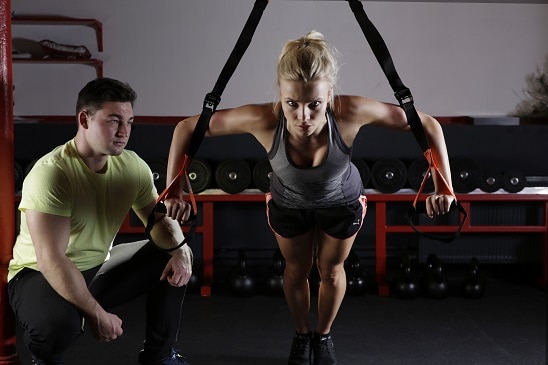 Are normal push-ups easy enough for you to do several dozen at once? Try it with bands!

Hold one end in each hand and loop it around your back.

When you’re at the top of the push-up, you’ll feel the extra resistance.

Or, you can hang the bands above you for an incline push-up.

Sit and balance on your glutes with the band looped around your feet, which can be in the air a little ways.

Hold the band with both hands near the top of your belly, keeping them close to your body. the further out, the more you work your sides.

Twist your body all the way to one side then the other for one rep.

Anchor the band to something level with the top of your belly.

Grab onto the band with your hands at that point and keep your arms close next to your body.

Stand parallel to the object, far enough away there is light tension on the band.

Turn your upper body away from the anchor while keeping the hips straight, then return.

Don’t forget to exercise the other side!

Anchor the bands to something shoulder-height.

Stand next to the anchor with your arms in front of your, together, holding the end of the band. Your feet should be a little wider than shoulder-width.

Twist away from the anchor and down, as if you were chopping your feet with an ax.

You’ll need to turn around to twist the other way for a balanced workout. 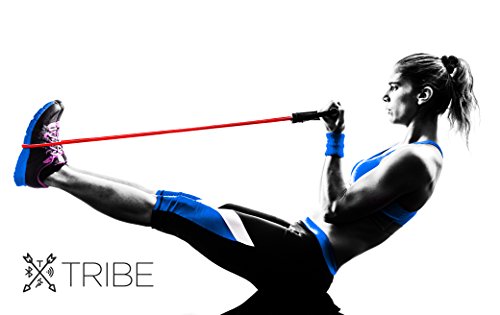 Lay on your back with your feet close to you so your knees are in the air.

Keep your hands on the floor by your side, holding onto the band. The middle should lay tightly across your hip.

Push your hips into the air, against the resistance of the band.

Lay on your back and hold the ends of the band in your hands. Loop the middle around one of your feet.

Make sure to exercise both legs equally.

This list of resistance band exercises only scratches the surface of what you can do with this workout tool, but it should be a good launching point for your own experimentation.

Whether you want toned glutes or to build muscle on the go, resistance bands can work for you!

Best Exercises for Getting Rid of Belly Fat

Best Supplements for Muscle Gain and Strength of 2021